GroundsCare Landscape was founded in 2008, but the owner and 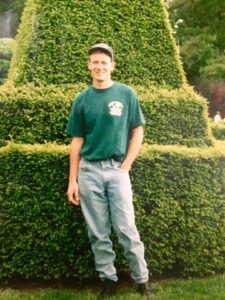 founding members roots in the landscaping industry began much earlier, with some of the leading national landscape service providers.  Since high school, Craig Lillis knew the landscape industry was where he wanted to grow and develop his professional career.  At 18 and a fresh graduate, he started his first landscaping company, Yardmaster, which at it’s smallest, was Craig, with a truck and a mower, and grew just to a few small crews, servicing residential customers around central New Jersey.  Craig will often reminisce about those simpler times, where success was measured by the cash in his pocket as he escaped for weekends at the Jersey shore with his friends.  After selling Yardmaster, the young entrepreneur knew his next step would be to gain invaluable knowledge from the corporate side of landscaping, and moved quickly through the ranks at TruGreen Landcare, spending many years as the regional manager overseeing New Jersey and the surrounding territory.

Corporate life certainly has its twists and turns, and as sales and mergers began at TruGreen, Craig saw an invaluable opportunity and timing to finally branch out on his own, and in the fall of 2008, GroundsCare Landscape was formed.  In much the same ways Yardmaster had its humble beginnings, that first season of GroundsCare included just a handful of employees and trucks, providing service to GroundsCare’s very first commercial customer.

In the years since, GroundsCare has grown to be one of the most recognized commercial landscaping, construction, and snow removal companies in New Jersey.  Much of the managerial staff already boasts double-digit time with the company, with the knowledge, experience, and passion that has built the team and portfolio into a dominating force.  The history of GroundsCare provides background on where we have come from, but Craig’s firm focus remains on the future, and the most important question – how can GroundsCare provide the most innovative services – utilizing the newest in technology, skills, and equipment, to give customers the best outdoor experience possible.